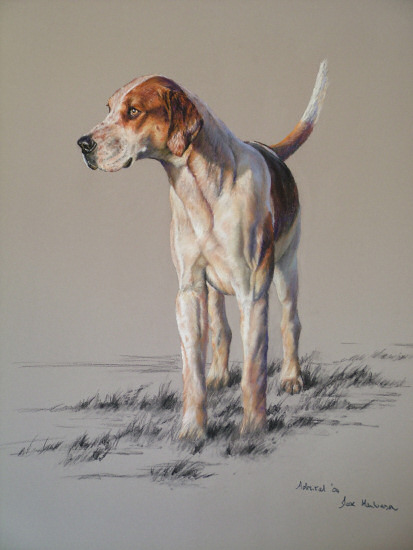 Mark Hankinson grew up on a farm on the Isle of Wight. After leaving school he lived in Southern Africa for six years whilst he worked as a professional guide in Botswana, was the farm manager of a nature reserve in the Drakensberg Mountains and was Head Ranger of the Sabi Sabi Game Reserve. His love of the African landscape and wildlife, and desire to portray it, eventually persuaded him to return to England to attend art school. On the advice of his father David, the well known portrait painter, he spent two years at the Byam Shaw School of Art.

In 1994 Mark was appointed Master and Huntsman of the United Pack in Shropshire. In 1998 he moved to Wiltshire and was Joint master and Huntsman of the Wilton until 2012. He now lives in Dorset with his wife and twin 11 year old daughters. He is in constant demand for his superb hound, horse and dog portraits and out of the hunting season, he regularly returns to various parts of Africa to paint and gain further material.
web site by island webservices